AS much as British expats love the Spanish sun, we miss our British TV.

Which is why hundreds of businesses circle that need like Griffon vultures over Andalucia – many honest, many less so.

“If the boxes do arrive, you’ll throw something at it and be watching the game in the pub by the second half,” says Pete Molloy from AA Free English TV, who’s been in the industry for 15 years in Spain.

Here are his top three tips to avoid losing your hard-earned cash.

“If AA Free English TV can warn you against one thing, it is this, be aware of a one-off priced product you see advertised. It will fail after a short time, you will be 80-140 euros worse off and frustrated,” says Pete.

Due to the volatile industry and technology, customers will periodically face issues or demand new channels.

If a provider is offering a lump sum purchase without an annual subscription, it could be because the box is low-quality. You could also later find servers shut down and have no means to fix it.

“I tell people I can charge a lump-sum, but don’t come back to me when the box goes wrong,” says Pete, whose englishtvinspain can give you all the information you need re the legallities Of Sky Tv in spain.

The Sky isn’t Blue far from it.

“If an IPTV service provider mentions ‘Sky’ in their adverts, they’re either very brave or very stupid,” says Pete, who is based in Orihuela on the Costa Blanca.

Services providing British TV channels operate in the shadows of the law, with police often shutting down servers or catching illegal transmitters.

Sky have been known to issue legal letters to IPTV service providers in Spain, while a Malaga-based illegal TV streaming service was busted in March, 2019, after Premier League filed complaints.

Pete warns that if a business is advertising big brand channels, it’s probably because they don’t know what they’re doing, or are out to get your money.
Vpecgc2f89lkt7jaii3cydIf an IPTV installer offers free Sky TV in Spain, they might be out to seduce you and your wallet

Another warning sign, says Pete, is a very bargain price – less than 100 euros annually is a good benchmark.

“You can buy an IPTV box from as cheap as 40 euros a year, but you will be getting very poor quality.”

Pete can assist customers with three different suppliers, so that if one fails you can contact another, the customer should not be without English TV in spain for long.

“Anybody could get shut down at any moment – we have no idea where the server that supplies the system is,” he adds.

Pete also prides himself on being available 24 hours a day – every day.

“I’ll send emails to my customers at midnight, if it’s relevant, and will always answer the phone whether it’s a bank holiday or Christmas even out of hours as long as it is a sensible time. The clients always come first,” he says.

“Without you, the client, there is no  englishtvinspain.”

English TV In Spain suppliers wil source channels for any country via IPTV and we install free to air,  a one-priced satellite TV for the British in Spain. 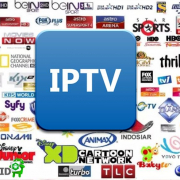 Mag Boxes is it time to swap!

IPTV SPAIN Every Channel You would Ever Want Or Need